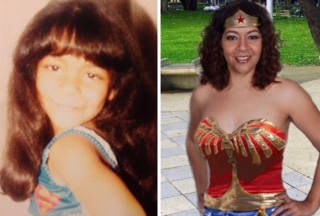 I admit I love a good superhero flick, but I didn’t realize how much until 2002. When I fell in love with Superman in the late 70s, I just attributed it to Christopher Reeves’ crystal blue eyes. In the 80s, when I passionately shot out of bed on Saturday mornings to watch Super Friends, I figured I was just like any other kid. However, even adults couldn’t resist the Bill Bixby-Lou Ferrigno super duo which was the Incredible Hulk. When my doctor asked me what I wanted to be when I grew up I said, “A doctor like you or Lynda Carter.” He thought I wanted to be an actress. No, I really wanted to be Wonder Woman. After all, I was already wearing Supergirl Underoos. It just seemed like the next logical step.

I don’t know what happened in the 90s. Maybe I was spending time on other pursuits or maybe this was a period that separated the true superhero aficionado from those on the mainstream bandwagon. Whatever the case may be, it wasn’t until the new millennium that I realized I must have a “thing” for superheroes. It happened while walking out of the theater after watching Tobey Maguire in Spider-Man. I was transported back to the days when I rushed home from school to watch Spidey on my grandparents’ television set. I even favorably reminisced over the short-lived live action series, The Amazing Spider-Man. All of a sudden, I had a desire to swing from flag poles and shoot web from my wrists. I found myself saying, “That was a fun movie.” A fun movie? “Who calls a movie fun,” I questioned? There must be something deeper underlying this excitement because by the time Iron Man was released I paid to see it FOUR times in the theater! And before I started writing this article, I unintentionally watched it on DVD THREE nights in a row. Who does that? Hmm, maybe it’s time for a quest.

In the study of literature, a basic, universal pattern emerges in hero narratives. It is called the hero’s journey. It outlines the hero’s story from the known to the unknown back to the known with newfound knowledge. It can be simplified into three acts: the departure, the initiation and the return. The departure of Act I is referred to as the call to adventure. This is where we meet the Clark Kents, David Banners, Diana Princes, Peter Parkers and Tony Starks of our contemporary superhero tales. We discover what their lives were like before they became or realized they were superheroes and before they depart into their new world. Act II, the initiation, is also called the road of trials. This is where the sword fighting, swash buckling, dragon slaying feats occur. In the aforementioned examples, enter in the characters and supervillians who show up to test, oppose or destroy our superheroes, but ultimately lead them to transformation. The return in Act III can be seen as the accomplishment. Here the hero returns “home” empowered with new wisdom and abilities that benefit his or her community. This is where our superheroes, with ongoing sagas, commit to the mission of fighting against crime for “truth, justice and the American way.”

While watching or reading these stories, can we really relate to these superhuman characters? Or do we like the idea that someone so powerfully invincible or immortal could exist to save us from the peril of our mundane lives? What is it about the hero’s journey that resonates with so many people cross-culturally? I believe to answer that question we have to continue our search and travel across the space-time continuum. The story of the hero is neither new nor exclusive to humanity. Case in point, look at figures such as Thor and Hercules. They are a perfect bridge between modern American superheroes and the classical heroes of Norse, Roman and Greek mythology. When we examine mythological heroes like these, we begin tapping into the realm of the divine. They were either demigods themselves or mortals who had a close, but often conflicted relationship with the gods. Many times they struggled between their loyalty to the things of earth and that of the heavens by acting as a liaison or protector of humans. Themes such as worship and glory are often associated with these types of heroes, which bring me to Act III of this article.

There is a scene from the movie Beowulf based on the Scandinavian heroic epic poem of the same name that perfectly brings my point home. The hero of the story is a brave and legendary warrior whose reputation precedes him and later becomes a king. He is soon coming to the end of his journey when his character makes what I think is historical commentary by saying, “The time of heroes is dead…the Christ God has killed it.” Despite the fact that he goes on to say, “Leaving humankind with nothing but weeping martyrs, fear, shame,” I believe the dialogue formulates a powerful statement and compelling argument to the profound effect Jesus Christ has made on literature. Religion and spirituality aside, the legend of Jesus Christ as the Ultimate Superhero changed the face of storytelling. Indeed, His is the Greatest Story Ever Told. Regardless of the comparisons that are made between the biography of Jesus of Nazareth and ancient myths that predate Him, Jesus still rises to the top as the most renowned. He literally gets all the glory. More people know about the events leading up to his miraculous birth, life, death and resurrection than any other hero’s tale. Just ask Linus. He explains it all in A Charlie Brown Christmas when Chuck screams, “Isn’t there anyone who knows what Christmas is all about?”

Linus confidently declares the true meaning of Christmas by reciting the second chapter of the Gospel of Luke verses 8 through 14, “And there were in the same country shepherds abiding in the field, keeping watch over their flock by night. And, lo, the angel of the Lord came upon them, and the glory of the Lord shone round about them: and they were sore afraid. And the angel said unto them, ‘Fear not; for, behold, I bring you tidings of great joy, which shall be to all people. For unto you is born this day in the city of David a Savior, which is Christ the Lord. And this shall be a sign unto you: Ye shall find the babe wrapped in swaddling clothes, lying in a manger.’ And suddenly there was with the angel a multitude of the heavenly host praising God, and saying, ‘Glory to God in the highest, and on earth peace and goodwill towards men.’”

The angel of the Lord showed up, but the angel did not “show out.” He did not take center stage. The angel pointed the spotlight on the “Savior which is Christ the Lord.” The shepherds and other attendees present at the scene of Christ’s nativity may have been afraid, but they were admonished by the angel to embrace the chief virtue of a hero— courage. “Fear not; for, behold I bring you tidings of great joy.” This proclamation does not sound like the weeping martyrs, fear and shame of which the Beowulf character spoke. “And suddenly there was with the angel a multitude of the heavenly host praising God, and saying, Glory to God in the highest, and on earth peace and goodwill towards men.” This sounds to me like the beginning and the ending of a story slated as “The Greatest World Hero.”

Like all good stories, you can see the end from the beginning and see the beginning in the end; it is cyclical. The Nativity Story of Jesus Christ prophesies his journey as the World’s Greatest Hero. Act I: He departs from the glory on high to become a babe wrapped in swaddling clothes, lying in a manager. Act II: He travels the fields at night and in the city by day to respond to and be tried by all who are sore afraid. Act III: He returns to the Glory of God in the highest having accomplished His mission to bring peace on earth and goodwill towards men. However, what sets Him apart from all other superheroes is that He is willing and able to share His power and glory with all who would believe in Him. I don’t know about you, but that’s an identity I would love to assume. That’s the Saving armor I would like to wear— complete with a belt of Truth, the x-ray vision of Faith, shoes so full of the Good News they can climb up the side of buildings, the smashing strength of Righteousness and last but not least the slinging hammer of the Word of God. And if that’s not enough, this story never ends. We get to share Eternal Life with the Master of the Universe and never suffer again, if only we believe. Sounds like a thrilling adventure to me. How about it? Let’s believe. Look, up in the sky!!!